Cameroon. In January, Maurice Kamto, leader of the opposition party Movement for Cameroon’s Rebirth (MRC), was arrested by police. Kamto became second in last year’s presidential election, won by the aged Paul Biya, president since 1982. Kamto refused to accept the election results and urged his supporters to protest. Two days before the arrest, MRC supporters demonstrated in the port city of Douala, killing at least three people. On the same day, over 100 people were arrested in regime-critical protests around the country.

In February, Kamto and 28 other MRC supporters were indicted for rioting. In July, Amnesty International raised an alarm that 59 of those arrested have been subjected to torture, including in the form of stings with wooden sticks, batons and cables. In September, MRC’s deputy party chairman, Mamadou Mota, was sentenced to two years in prison for participating in a revolt among prisoners in a prison in the capital, Yaoundé. They were imprisoned waiting to be brought to trial for riots in connection with the protests earlier this year. In October, Kamto and several other MRC members were released in connection with the release of over 300 other prisoners. These had been arrested for participation in the separatist uprising that broke out in the English-speaking parts of the country in the fall of 2017.

In February, unknown perpetrators burned down a hospital in the town of Kumba, which is located in the English-speaking Southwest region. The deed was carried out on National Youth Day, which is celebrated on February 11. On the same date in 1961, the referendum was held which led to the unification of parts of British Cameroon with French Cameroon.

In August, the leaders of the English-speaking separatists, Julius Sisiku Ayuk Tabe, and nine others were sentenced to life imprisonment for terrorism and separatism. In October 2017, the outbreak Republic of Ambazonia was announced with Ayuk Tabe as President. Around the month of September – October, a national dialogue was held between the government and some of the separatist leaders (others chose not to participate). The talks led to a proposal that the two English-speaking regions should be given increased autonomy, including in the form of increased taxation rights and a re-establishment of the traditional leaders. In addition, the governors of the regions will be appointed by regional elections instead of being appointed by the government in Yaoundé. The proposal was rejected by radical separatists who demand full independence. In December, Parliament’s lower house approved the proposal for special status for the English-speaking regions. For this to go through, the proposal must also be approved by the Senate. 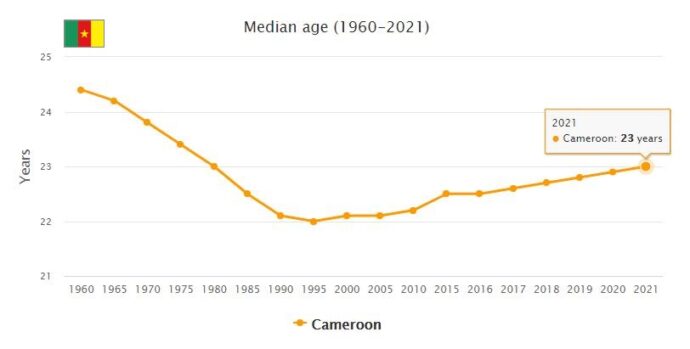 The first regular census was carried out in colonial times (1935) and gave a result of 2,300,000 residents approximately, doubled at the time of independence (1961), tripled according to the 1976 census and more than sixfold at the beginning of the 21st century, despite a not very high annual growth rate for an African country: 2.1%. The rural exodus is significant and the urban population exceeds 40% of the total, concentrating for more than half in the two main cities: the capital, Yaoundé, and Douala, the most populous and dynamic center. The other cities are of modest demographic size and perform only administrative and commercial functions. The population is very unevenly distributed: the highest densities are recorded in the central-western areas, the lowest in the Far North, where the climate is particularly arid, as well as in the south-eastern strip, covered by rainforests, and in the mountainous area of ‘Adamaoua. The rural settlement is mostly centralized. With reference to the human development index calculated by the United Nations in 2007 by aggregating three particularly significant data (life expectancy at birth, literacy rate, per capita income at purchasing power parity), Cameroon is in 144th place in the world ranking.

Most of the residents commonly use Bantu and Sudanese languages. About 40% of the population follows animist cults; the same number are Christians, almost exactly divided between Catholics and Protestants, with a slight prevalence of the former; the remaining 20% ​​is of Islamic religion, strongly rooted in the central-northern areas.