Costa Rica. During the year, the government was subjected to a series of protests against proposals aimed at boosting economic growth. In August and September, the teachers’ unions organized major protests in the capital, San José, against the government’s proposal to restrict the right to strike in certain key sectors, such as health care and schooling, and Education Minister Edgar Mora was forced to resign. At the same time, health care workers were striking in protest of the tax reform, including a tax increase, which the government managed to vote in Congress as a result of an agreement with the opposition in December 2018, and transport workers blocked roads around the country for the same reason.

Furthermore, the high unemployment rate and rising cost of living overshadowed the success that President Carlos Alvarado, after all, noted during the year. The tax reform, for example, was a great cross-party success that several of his predecessors tried to implement, as well as the fact that the number of homicides in the country fell for the first time in five years. The latter was attributed to 30 successful “mega operations” by the police against organized crime. 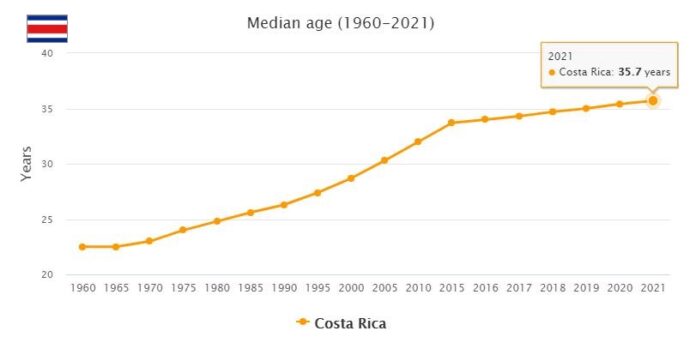 Demography and economic geography. – State of Isthmian Central America. For the long democratic tradition and the high level of social stability, the Costa Rica (4,301,712 residents at the 2011 census, 4,937,755 according to an estimate by UNDESA, United Nations Department of Economic and Social Affairs, of 2014) is one of the most developed countries in Central America. Government programs to support public spending (which annually accounts for 20% of GDP) have ensured residents access to education, health care, clean water and electricity. The foreign population represents 9% of the total, with a prevalence of immigrants (legal and illegal) from Nicaragua. Producer of coffee, bananas, pineapples, sugar cane and cocoa, the country sustains itself above all thanks to exports of non-traditional products (microprocessors, technical and electro-medical tools) and a highly developed service sector (call-centers, software, banks). Furthermore, with its remarkable number of biodiversity, the country can count on a thriving ecotourism.

History. – The elections of February 2006 marked the beginning of a phase of political transition in Costa Rica, characterized by the erosion of bipartisanship and the fragmentation of the political system. Óscar Arias, former head of state from 1986 to 1990 and candidate of the Partido de liberación nacional (PLN), one of the two main national parties, was elected president of the country, with 40.9% of the votes. while Ottón Solís del Partido de acción ciudadana (PAC) stopped at 39.8%. Although Arias had long been given an advantage of more than 20 percentage points over its rivals, the electoral contest turned out to be the most closely fought in the history of the Central American country. The results highlighted the decline of the conservative Partido unidad social cristiano (PUSC), long in the government of the country, but overwhelmed by heavy corruption scandals,

The key issue of the Arias government was the approval of the DR-CAFTA (Dominican Republic-Central American Free Trade Agreement), the free trade agreement between the United States and Central American countries, which caused a clear split in Costa Rican society: from a part, the liberal-conservative forces, including the ruling party, in favor of the agreement; on the other, the trade unions, environmental organizations and public universities represented in Parliament by the PAC, opposed. The polarization led the government to hold a popular referendum which took place on 7 October 2007. The vote in favor of the agreement (51.5%) barely prevailed, with a series of accusations and controversies.

The 2010 elections saw the affirmation of the government candidate, Laura Chinchilla, who thus became the first female president in the history of the country. The Chinchilla administration began its mandate with the goals of continuing Arias’ liberal policies (extending the network of free trade agreements and liberalizing strategic sectors such as energy and telecommunications), investing in education and combating drug trafficking with the support of the United States. However, the government was hit by numerous corruption scandals related to the management of large public works; scandals which, coupled with the growing discontent with neoliberal policies, caused a collapse in the popularity of President Chinchilla.

In 2012, the PLN elected former San José mayor Johnny Araya as a candidate for president, in an attempt to overcome the consensus crisis. However, the elections of February 2014 confirmed the decline of PUSC and PLN and were marked by the rise to power of the PAC, with the victory of Luis Guillermo Solís in the presidential elections. Solís – university professor and former member of the PLN – won the elections thanks to an electoral campaign focused on the fight against corruption and in favor of an alternative economic platform to the neoliberal model. The new president announced an ambitious National Development Plan based on the reform of the tax system and the fight against tax evasion, aimed at financing social policies to reduce poverty and unemployment.

In foreign policy, the Costa Rica continued to expand the network of trade agreements that guaranteed the country a deep integration into the world economy. However, due to a territorial dispute, relations with Nicaragua remained strained, accused of violating the Costa Rica sovereignty in the San Juan River dredging operations. In 2010, the Costa Rica took the case to the International Court of Justice.