For over 1000 years, the Senegal River’s bridges have been populated by Muslim people who were in contact with neighboring Arab countries. Different geographical zones in these countries make up the so-called Sahel Belt that extends across Africa. Uloof the people who today make up a third of the total population of Senegal, Fulani, Tuccles and other peoples already lived in the area when in the 18th century France occupied it and included it in the classic triangle trade: European goods were exchanged for slaves, sent to the American continent where they were exchanged for rum and sugar for Europe.

When the French Revolution abolished slavery in 1848, the Senegalese became “second class citizens” within the empire with the right to elect a deputy to Paris. In addition, Senegal contributed its production of thousands of tons of peanuts and soldiers to the French army.

In the second half of the 19th century, Muslim leaders continued to revolt. It was not until 1892 that the French succeeded in “pacifying” the country.

Around 1933, the idea of ​​pan-Africanism developed in Paris, and poets Léopold Sédar Senghor of Senegal and Aimé Césaire of Martinique formulated the concept of ” negritude “, a rejection of cultural assimilation into French civilization which claimed to be “universal”. “Negritude” was designed as an “instrument of liberation”. The purpose was according to. Senghor, to “free oneself from the pittoresque and be part of the present solidarity movement”. So organize yourself politically.

Senghor had been active in the resistance struggle against the Nazis in France during World War II, and in 1945 was elected deputy to the French National Assembly. In 1948, he founded the Senegal Democratic Block, later renamed Senegal’s Progressive Union. It advocated greater autonomy for the colonies, but without requiring independence.

On April 4, 1960, Senegal declared itself independent to declare itself a republic on September 5 of that year. Senghor was named the country’s first president, and by a series of re-elections he remained in power for the following two decades. On January 1, 1981, he was replaced in the post by Abdou Diouf, who until then had been prime minister.

During his 20 years in power, Senghor unfolded a form of “African socialism ” based on the idea that the traditional agricultural community is fundamentally collectivist. He believed that “socialism” already existed in Africa and that it was therefore not necessary to build it. Within the context of the world economy, this “collectivism” aimed to provide cheap labor for the export-oriented agriculture (peanuts and cotton) controlled from abroad. At the same time, the industry in Senegal was in French hands 82%.

In anticipation of future political changes in France, Senghor requested membership in the Socialist International, and implemented a constitutional reform that would provide a basis for a limited democracy based on three parties: the Liberal Democratic Senegal Democratic Party (PDS), the Marxist African Party for Independence. and his own, which was named Senegal’s Socialist Party (PSS).

During the 1980s, President Diouf increased the flexibility of the formerly rigid political system: more than 14 political organizations emerged, preventing the main opposition party PDS led by Abdoulaye Wade from uniting the opposition.

At the same time, in 1982, in the southern province of Casamance, a separatist movement emerged: Casamance’s Movement of Democratic Forces (MFDC), led by abad Austin Diamacoune Senghor. The people in this area belong predominantly to the diol people, are animists, have traditionally demanded autonomy and have refused to submit to the hierarchical Islamic communities in the north. Following several clashes with police forces, several of the movement’s leaders were arrested in December – including Diamacoune.

Over the past 20 years, the country’s economy has been hit hard by repeated droughts. This has contributed to desertification, which is mainly due to climatic conditions and the French’s replacement of traditional food crops with export crops. 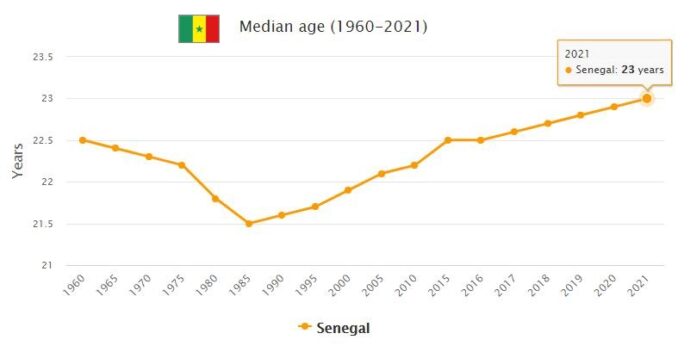