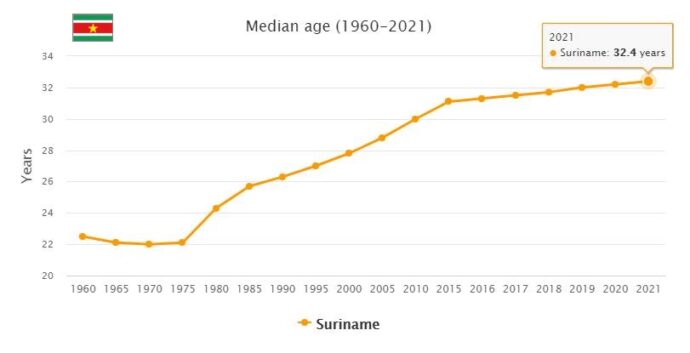 Demography and economic geography. – State of South America. A peculiar aspect of the country (543,925 residents, according to an estimate by UNDESA, United Nations Department of Economic and Social Affairs, of 2014) is represented by the ethnic fragmentation of the population, testimony of the colonial past: in Suriname %), blacks (known as maroons, 21.7%), Creoles (15.7%), Indonesians (13.7%), mestizos (13.4%) and others (8.1%), who make up communities of Christians, Hindus and Muslims. The mining industry allows exports of bauxite, alumina, gold and oil (85% of total foreign trade and 25% of the country’s income), however conditioned by the trend in prices of raw materials on international markets. Driving activities for employment are also the primary sector and tourism, the latter hampered by competition with neighboring countries and by the lack of infrastructure.

History. – During the first decade of the 21st century, the Suriname continued to deal with its authoritarian past: in July 2006, President Ronald Venetiaan offered an official apology to the relatives of the victims of the Moiwana massacre of 1986, during the military dictatorship; while in November 2007 the trial began against the former military dictator Desiré Delano ‘Dési’ Bouterse and 24 other defendants accused of involvement in the December moorden (“the December crimes”), the massacre of 15 opponents of the regime which took place in December 1982. The process – during which Bouterse assumed political responsibility for the events while denying any direct responsibility – suffered many slowdowns in the following months without reaching a final verdict.

Bouterse remained political protagonist of the Suriname and in 2010 led the Megacombinatie coalition – formed by his Nationale democratische partij (NDP, National Democratic Party) party together with the Progressieve arbeiders-en landbouwers unie (PALU, Progressive Union of Workers and Peasants), to Nieuw Suriname (NS, New Suriname) and Kerukunan tulodo pranatan inggil (KTPI, Party for National Unity and Solidarity) – to victory in the May 25 elections, in which they won 23 of the 51 seats in Parliament. The main force opposed to the Megacombinatie, the Nieuw front (New Front), won only 14 seats and on July 19, 2010, Bouterse was elected president of the country with 36 votes in Parliament.

In April 2012, Parliament passed an amnesty law granting immunity to Bouterse and the other 24 defendants accused of the Decembermoorden, causing great international outrage: the Netherlands – the former colonial homeland where Bouterse was sentenced in absentia in 1999 for drug trafficking – recalled their ambassador suspending aid to the country. In July 2013, Bouterse’s son, Dino, was arrested in Panama and extradited to the United States – accused of aiding arms and drug trafficking by supporting Mexican narcos and Ḥezbollāh – and, in March 2015, he was sentenced to 16 years. of imprisonment.

In the elections of May 2015, the National Democratic Party won the victory by winning 26 seats and in July the Parliament confirmed Bouterse as president.

In foreign policy, the Suriname’s relations with neighboring states over border issues remained strained, despite a dispute over maritime borders with Guiana had been resolved in 2007. In July 2013, the Suriname signed a framework agreement with MERCOSUR (Mercado Común del Sur) and in December became a member of the Caribbean development bank, a financial institution aimed at promoting the growth and development of the member states.