Zambia. In February, Minister of Housing and Infrastructure Ronald Chitotela was arrested by the country’s anti-corruption unit. Chitotela was charged with concealing possession of two properties he suspected of having acquired illegally. Later, more charges were filed against Chitotela. Another former minister was indicted during the year, namely Emerine Kabanshi, Minister of Social Affairs until September 2018. She was suspected of involvement in embezzlement of aid money and charged with abuse of power.

In February, Hakainde Hichilema, leader of the largest opposition party United National Development Party (UPND), was subjected to a murder trial. This according to information from party representatives, who a week later said they would report President Edgar Lungo and some of his closest associates to the International Criminal Court (ICC) for being responsible for violence against the opposition. According to UPND, police in connection with a political meeting had shot at Hichilema, who had to take refuge in the bush so as not to be killed. The police denied being shot sharply.

The new government restructured the economy, privatized state-owned enterprises and doubled the price of cornmeal and other basic foods. In December 1992, the government accepted the recommendations of the IMF and the World Bank; it devalued the country’s currency by 29%, released the foreign exchange market and deregulated foreign trade. In early 1992, southern Africa experienced the worst drought of the 20th century and was plagued by food shortages.

A meeting of Western countries with the World Bank as host provided 400 million food aid to Zambia. In July, the Paris Club decided to restructure Zambia’s debt. The deal allowed the country to reschedule $ 920 million out of the 2,300 it owes to club members.

President Chiluba turned Christianity into official religion and banned the formation of a fundamentalist party. The Islamic religious authorities estimated that there were 1.2 million Shiites and 1 million Sunni Muslims in the country.

In March 1993, the country was put in an emergency in an attempt to avert a popular plot for civil disobedience. Several UNIP members who knew about the existence of the plot were jailed, and the state of emergency was lifted at the end of the month.

Inflation reached 140% in 1993. The government had to reduce public spending, encourage the privatization of businesses and fight drug trafficking to obtain the necessary support from the Paris Club in 1994.

The University of Zambia was closed in April 1994, when 300 scientists and teachers were fired for demanding salary increases. The savings in the education sector triggered constant strikes among teachers.

The accusations of corruption and the lack of agricultural policy in 1995 prompted the president to ask for the departure of the Minister of Agriculture and to ask the other ministers for statements of their income. Shortly thereafter, Chiluba removed the director of the country’s national bank for suddenly devaluing the country’s currency, kwacha by more than 20%. Chiluba was blamed for the country’s foreign debt crisis, whose interest and repayments swallowed 40% of the gross domestic product. The Minister of Commerce admitted in July that 5.5 of the 9.5 Zambians lived in extreme poverty.

In March 1996, the Paris Club left Zambia 67% of its debt. The IMF and the World Bank’s structural adjustment program, implemented in 1997, brought greater poverty among the rural population, and the privatization of state-owned enterprises cost at least 150,000 workers their jobs.

A month after a failed coup attempt (November 1997), dozens of people were arrested for possible contacts with the rebel officers. Among those arrested were former President Kaunda, who, after a change in the constitution, was prevented from running for president. Representatives of the opposition and human rights organizations stated that the failed coup attempt became a pretext for carrying out detention and torture of prisoners. The government introduced a state of emergency which was to last for 3 months but was extended until March 1998. In June 98 Kaunda was released from his house arrest and the charges against him were waived. In turn, the former president resigned as chairman of his party, UNIP. 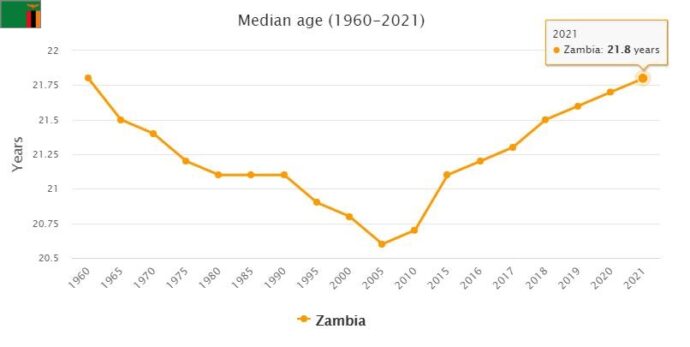 Demography and economic geography. – Internal state of central and southern Africa. The rate of population growth (13,092,666 residents at the 2010 census, 15,021,002 residents in 2014, according to an estimate by UNDESA, United Nations Department of Economic and Social Affairs), with an average age of 16.7 years, is 3.2% per year (2010-15), while the distribution is 40% in urban areas: the capital, Lusaka, has 1,747,152 residents; other cities are Kitwe (570,000 residents) and Ndola (489,000 residents). Life expectancy, of only 58.1 years (2013), is explained by various factors: the spread of AIDS / HIV (Acquired Immune Deficiency Syndrome / Human Immunodeficiency Virus), which, affecting 1,100,000 people (estimate UNAIDS, Joint United Nations Program on HIV and AIDS, of 2013), ranks the country in 9th place in the world for number of patients; poverty, which still affects 63% of the population; inequalities; precarious social and health conditions (eg 37% of the population does not have access to drinking water). There are 54,000 refugees from Angola, the Democratic Republic of Congo, Rwanda, Burundi, Somalia. The literacy rate is 63% and the per capita GDP at purchasing power parity (PPP) is $ 4113 (2014): this places Zambia in 141st place in the Human Development Index, among the countries medium development.

Economic conditions. – From an economic point of view, Zambia is no longer among the low-income countries, having experienced sustained growth in the last decade (on average, + 7%) which has brought it among those with medium-low income, mainly driven from the construction sector (+ 12% from 2008 to 2013), but also from transport, communications and services; the results in the manufacturing sector are also significant: agri-food, beverages, tobacco (61,500 t produced in 2012) and building materials. The main sector remains agriculture (about 20% of GDP), especially in terms of the workforce employed, although exposed to variations in atmospheric precipitation. The mining sector is also constantly growing (10% of the workforce), with important Chinese investments for the extraction of copper (830,000 t, 2013; 11th world producer). Exports (especially to China, South Africa, the Republic of Korea and India) represent 45.5% of GDP, while development prospects concern tourism (859,000 entries in 2012).